Why activists are celebrating the closing of Tufts’ Confucius Institute
minam
March 18, 2021
3:50 pm 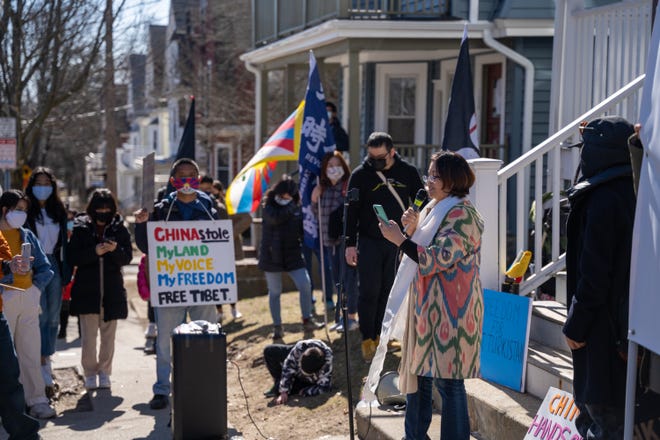 On March 13, a coalition of activist groups held their 13th protest calling on Tufts University to close the Confucius Institute. A 14th protest was planned for the next weekend, but on March 17 Tufts announced it would not be renewing the agreement with the institute, effectively closing the Tufts University Confucius Institute by this September.

Several organizations, including Students for a Free Tibet (SFT), the Boston Uygher Association, and Hong Kong Social Action Movements Boston, have been protesting Tufts having a Chinese government-sponsored institute on campus as the Chinese Communist Party carries out genocide, occupation, and crimes against humanity.

“This is a victory for all Tibetans, Uyghurs, Hongkongers, Taiwanese, and Chinese activists and students, as well as our allies living in the Somerville and Medford area who have protested the Tufts CI,” said SFT organizer Tenzin Yangzom. “We refused to accept that the Chinese government — the very regime that has driven us from our homelands — had a home at Tufts, and a presence in our own backyard. We know our actions helped President Monaco and Tufts University realize, finally, that a partnership with a government committing genocide does not align with the values of Tufts students nor the surrounding community.”

A Tufts statement said the decision to move on from the institute “will enable the university to focus on expanding and deepening its relationship with [Beijing Normal University], whose College of Chinese Language and Culture is regarded as a leading center for teaching Chinese as a foreign language.”

What are Confucius Institutes?

Confucius Institutes are not a local initiative. There were 51 institutes in the United States as of March 12, according to the National Association of Scholars.

Confucius Institutes are funded by the Office of Chinese Language Council International, which is affiliated with the Chinese government’s Ministry of Education. According to Tufts’ website, institutes are non-profit programs that aim to promote Chinese language and culture.

Tufts’ institute launched in 2015, and is an educational collaboration between Tufts and Beijing Normal University. The institute offers Chinese language instruction and cultural programming, as well as facilitates exchanges between the universities.

The first Confucius Institute was established at the University of Maryland College Park in 2004, according to Inside Higher Ed, and many more began opening up in the next decade. In 2017, a report from the National Association of Scholars counted 107 in the country.

In the last few years, many schools have not renewed contracts with institutes. This is in part due to the 2018 signing of the National Defense Authorization Act, which prohibits the Defense Department from funding Chinese language programs at universities that host the institutes.

Tufts’ institute is the last in the state, after UMass Boston closed its institute in 2019.

Yangzom said that since 2010, SFT has been tracking complaints from Tibetan students at universities that have Confucius Institutes. While they haven’t had any formal complaints from Tufts students, she noted many are afraid to speak out.

She shared one example of a North Carolina university canceling a talk from the Dalai Lama after it received a warning from the head of the Confucius Institute.Your stories live here.Fuel your hometown passion and plug into the stories that define it.

“There is legitimate evidence they’ve been suppressing academic freedom on campus,” she said. “Since there are no formal complaints at Tufts…we’re instead focusing on Tufts standing against repression, genocide, injustice, and environmental degradation, and immediately ending their contract with the Confucius Institute.”

The Tufts campaign has been ongoing since June 2020, when Tibetan community members and others emailed Tufts President Anthony Monaco demanding he close the Confucius Institute. Yangzom said they received a response about changes Tufts made, including resigning for a shorter contract in 2019, but continued asking him to terminate the agreement.

“The Confucius Institute is directly funded and operated by the Chinese Communist Party,” he said. “We are in support of cultural and language exchange for the students – which are great opportunities - but we’re glad they’re shutting down the Confucius Institute, which is the only foreign government-operated institute on campus.”

Maya Mitalipova, a pioneering stem cell scientist and founder of the Boston Uygher Association, spoke passionately against the repression of her people. Mitalipova is from Almity, Kazakhstan, a city not far from the Xinjiang region of China where many “re-education camps” are reportedly located.

She said several members of her extended family are in camps or prison, including a 75-year-old male relative and nine other male relatives of varying age.

“The reason why he was put into this re-education camp was because he went to Mecca for a haj in 2010,” she said. “After he retired he went to Mecca, and that’s why he’s been placed into concentration camp. His son just turned 35, and he’s also in prison – he was given a 20 to 30 year sentence for visiting Turkey. His son-in-law, also about 35 years old, is also in a camp.”

Several activists noted a special part of this effort has been the coalition that’s formed around it. Tibetan communities have come together with Uyghers and Hongkongers to stand against the human rights abuses committed by the Chinese Communist Party (CCP).

“In just over 20 years, the Chinese Communist Party has managed to turn Hong Kong – which used to be a city of freedom – into a city under a totalitarian regime,” said Choi. “They implement the changes step by step. Hong Kongers – we know how the CCP can take over a place, a country, a city in a very short period of time, and it’s our responsibility to warn Americans of the CCP.”