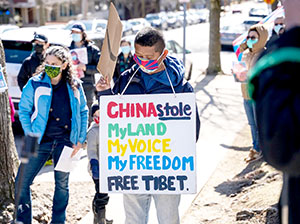 The following press release was issued by the Students for a Free Tibet organization on Wednesday:

Members of the Tibetan, Uyghur, Hongkonger, Taiwanese and Chinese communities, together with Tufts students, alumni and faculty, have been demanding the closure of the Chinese government-sponsored program citing abuses by the Chinese government, including the ongoing Uyghur genocide, occupation of Tibet, and brutal crackdown on democracy in Hong Kong.

Over 600 letters in support of the campaign were sent to President Monaco and four elected officials, including the offices of Somerville Mayor Joseph Curtatone, Medford Mayor Breanna Lungo-Koehn, US Congresswoman Katherine Clark, and US Congresswoman Ayanna Pressley. President Monaco had yet to respond to the activists’ letters when the announcement of the intended closure was made today.

Representatives from the Tibetan, Uyghur, Hong Kong, and Taiwan movements spoke about the importance of today’s decision by Tufts University and what it means for the larger movement to counter the Chinese government’s long arm.

Tenzin Yangzom, Students for a Free Tibet Grassroots Coordinator, spoke about what the campaign meant to her as a Tibetan-American student from the Greater-Boston area: “This is a victory for all Tibetans, Uyghurs, Hongkongers, Taiwanese, and Chinese activists and students, as well as our allies living in the Somerville and Medford area who have protested the Tufts CI. We refused to accept that the Chinese government — the very regime that has driven us from our homelands — had a home at Tufts, and a presence in our own backyard. We know our actions helped President Monaco and Tufts University realize, finally, that a partnership with a government committing genocide does not align with the values of Tufts students nor the surrounding community. According to SFT’s independent research, Tufts University marks the 70th American institution to sever ties with the Confucius Institute since 2014.”

Christopher Choi, a Hong Kong activist with HK Social Action Movements Boston, said: “We are honored to be part of this amazing coalition of friends from the Tibetan, Taiwanese, and Uyghur communities. Shutting down the Confucius Institute at Tufts University is the beginning of many joint initiatives to counter Chinese government propaganda in the US and to call upon the international community to take action to safeguard democratic values in the free world. Today the Tufts University administration fulfilled its moral obligation and made the right decision to shut down its Confucius Institute. We urge the remaining American colleges that still host CIs to stand on the right side of history and end ties with the Chinese Communist Party immediately.”

Maya Mitalipova of the Boston Uyghur Association celebrated the success of the campaign: “After 13 weeks of continuous effort, we are overjoyed to hear the decision by Tufts University to end its contract with the Confucius Institute. It is a small step in our grassroots advocacy work against the Chinese regime, but it gives us hope that the voices of impacted communities are powerful enough to effect change. Uyghurs, Tibetans, Hong Kongers, and other groups oppressed by China will be free!”

Howard Fass, the Formosan Association for Public Affairs MA President added: “Today, Tufts University publicly stated that their Confucius Institute will be closed in the coming months ahead. Tufts did not do this because they wanted to. In fact they did everything they could to keep it as long as they could. They finally closed it because they saw that our collective resolve was unbending and that we would not give up with our peaceful protest for truth. No cold of winter, rain or any other obstacle would ever stop us. We were prepared to continue no matter how long it would take.”

April 2nd, 2021 will be the final protest at Tufts University. Weekly protests at Tufts University were jointly organized by Students for a Free Tibet Boston, the Tibetan Association of Boston, the Boston Uyghur Association, Hong Kong Social Action Movements Boston, and the Formosan Association for Public Affairs MA. The organizing coalition welcomes our friends from the community and press to join us for a final “Solidarity Saturday” to celebrate our hard-fought victory on April 3rd from 1:00-2:30 pm outside the Confucius Institute building.