Remembering the Victims of the Ürümchi Fire
admin
December 8, 2022
2:26 pm 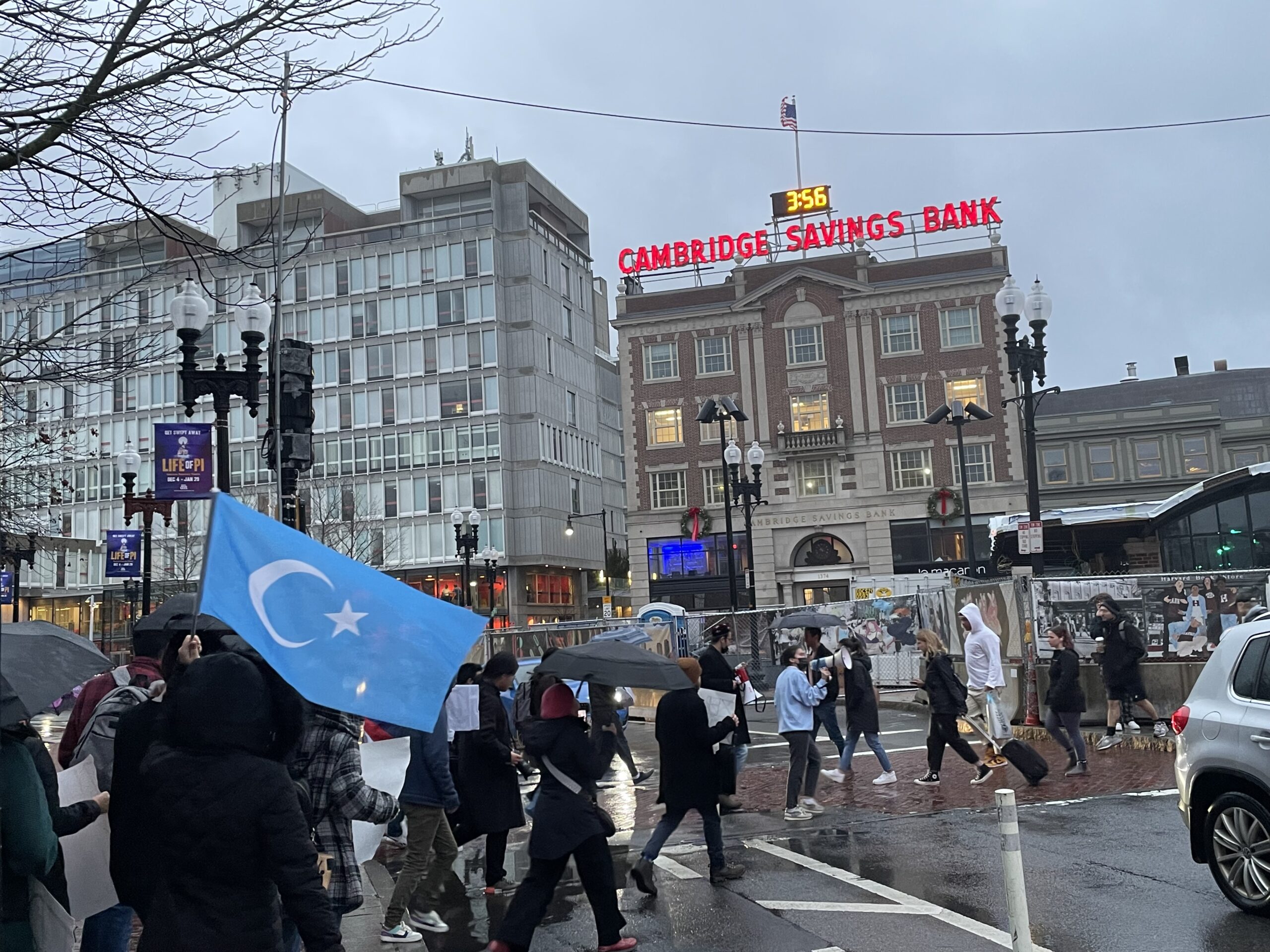 The march and vigil amplified Uyghur voices at Harvard and Boston

On December 3rd, over 80 people gathered at the steps of Widener Library to remember Uyghur victims and protest the Chinese Communist Party’s mistreatment of minority groups in crisis.

On November 24th, 2022, a deadly fire ravaged an apartment block in a primarily Uyghur neighborhood in Ürümchi, the capital of East Turkistan, also known as China’s Xinjiang region. After an electrical issue started the fire in the apartment complex, victims — who were almost entirely Uyghur — could not escape because apartment doors were locked from the outside to maintain China’s “Zero Covid” protocol.

While official Chinese Communist Party data reports ten deaths and nine injured civilians, actual estimates were reported during the demonstration to be as high as 44 dead.

The Chinese Community Party’s quarantine restrictions in in Ürümchi have been particularly severe as yet another system of control over the Uyghurs, one of China’s largest minority groups in the East Turkistan region. For over a hundred days, residents of Ürümchi have been prohibited from leaving their homes as part of this policy.

“Before the fire, I was supporting Chinese Covid-19 policies. I sincerely hoped these policies would save lives, but this fire woke me up,” said a Chinese international student who spoke under the alias Ruth. “I began to think, [are these measures] protecting or controlling? Are we protecting people’s interests or someone else’s?”

The recent demonstration united Harvard activists and students from other universities with members of the Boston Uyghur Association (BUA). For fear of subsequent violent repercussions to their families in China, many demonstrators hid their faces. Some attendees — primarily Chinese international students — wore tinted sunglasses, masks, and hoods. Event organizers also offered masks to attendees at the beginning of the event.

Uyghur students Kay, an undergraduate at the College, Esedullah Uygur, a student at the Divinity School, and Munawwar Abdulla, a research assistant in the Department of Human Evolutionary Biology, organized Saturday’s protest and subsequent vigil to highlight the Uyghur identities of the Ürümchi victims.

Kay has been involved with protests supporting other causes in the past, but this event was her first time organizing for Uyghur rights. “A lot of protests aren’t highlighting the Uyghur genocide or highlighting that Uyghurs are Muslim, or that almost 40 of the people who were killed were Uyghur,” Kay said, who has chosen to be represented under an alias for personal safety.

Kay expressed that other events related to this crisis were “completely in Mandarin and played the Chinese national anthem, which is very harmful to [those from] marginalized and occupied territories in China. [The events] might have had a different context for the Chinese organizers, but it was definitely different for us. After attending these vigils, I decided that Uyghurs at Harvard should try to organize.”

The Harvard demonstration began with a march on Widener steps, which weaved through the Old Yard and proceeded into the Square. While marching, organizers Kay and Uygur chanted, “when families burn in their homes, what do we do?” Protestors responded, “stand up, fight back.” Additional chants included “step down Xi Jingping,” “step down CCP,” “close the concentration camps,” and “stop Zero Covid.”

In China, Uyghurs are barred from practicing the Islamic faith and from learning their native language. Uyghurs are experiencing systematic ethnic cleansing in China through detainment in concentration camps—dubbed “vocational training centers” by the CCP. The mass internment of Uyghurs in such camps is the largest-scale detention of ethnic and religious minorities since World War II.

Uygur read the Surah Fatiha, the first chapter of the Qur’an, and the first page of the Qur’an’s 36th chapter, Surah Yaseen. Before paying his respects to the victims, Uygur addressed the crowd, saying, “unfortunately, right now, Uyghurs are having difficulties practicing Islam, so they cannot read Qur’an passages to honor their dead.” During the reading, Uygur wore a Doppa, a hat traditionally worn by Uyghurs during special occasions such as funerals.

After the march, demonstrators paid their respects to the victims of the Ürümchi fire. Kay reflected, “it was powerful. Uyghurs dying in China are not getting a proper Islamic burial. Even if [we just read] a page out of the Qur’an, this is probably the closest they can be to their religion.”

Abdulla shared a poem with the crowd written in 2017 when the internment of Uyghurs began. Before speaking, Abdulla said, “unfortunately, this poem is still relevant.” The piece spoke of the suppression of Uyghur identities, and opened with, “He is ‘at risk’ if he grows a beard, or if she wears a scarf. If she dresses too modest, if we try to fast. If I own a prayer mat and pray in my home, if I say ‘salaam’ instead of ‘hello.’”

The event concluded with a series of speakers visiting from the greater Boston community. Representatives from Students for a Free Tibet and the Taiwanese organizing community shared their support for their Uyghur peers.

Following these speakers, a member of Northeastern University’s Student Coalition of Pro-Uyghur Advocates and Free Uyghur Now encouraged his fellow undergraduates to “hold our institutions accountable for investing in Chinese companies who use Uyghur labor.” He shared, “I am an example that you do not have to be Uyghur or Chinese to support this cause. This is a human rights issue, and we all have a stake within it.”

A representative from BUA reminded the audience that “Chinese oppression did not start after the Ürümchi fire or the Covid lockdown. It has been going on for years and years.” In 2017, the speaker’s father was sent to a concentration camp in East Turkistan at the age of 42. She said, “[my father] is now suffering in unknown places because he sent his daughter abroad to study. China has stolen five years of my father’s life. My biggest challenge is living in a free world while my father is in a dark cell somewhere unknown.”

The speaker concluded by saying, “The Ürümchi tragedy has finally shaken up the world. Global movements like this are historic. With unity, we can stop the genocide and atrocities committed by the Chinese government.”

Uygur agreed with the BUA speaker: “We’ve lost so many people in the past, and these people are forgotten. I hope we’ll remember [those who died in the Ürümchi fires]. I don’t want to lose more people to stop this. I hope this will be the end, and I hope their loss will be the beginning of a great start to freeing the people experiencing harshness in the concentration camps today.”

The vigil concluded with statements from Han Chinese international students standing in solidarity with Uyghurs. To protect their safety, students shared their thoughts with the audience under aliases.

The first student shared that due to student protests in mainland China against the Ürümchi fires and the harm suffered by Uyghurs, he was inspired to protest individually by standing in Harvard Square holding a blank sheet of paper. In Chinese protests, blank sheets of paper represent what protestors wish they could say but lack the agency to express. This movement has since been dubbed the A4 Revolution, named after the size of the printer paper held in protest.

He said, “during my three hours of protest, a passerby bowed to me. In my life, this has never happened to me. Perhaps that’s because I did something right.”

Regarding Chinese censorship, Ruth said, “I don’t want to have to [cover my face] to say something I think is right. To the Uyghurs, I stand with you.”

Kay said that “it was important to have a Han Chinese perspective [at the demonstration] as well, because even though the CCP is repressing all groups, I feel that the Han Chinese have enjoyed much more privileges compared to other groups, and I applaud them for using their privilege to protest.”

Reflecting on the event, Abdulla said, “I’m very appreciative of all the new faces [I saw at the demonstration] and how that might mean we’ll have more people working on these issues in our community. A lot of the time, we lack manpower in this movement because of censorship and self-censorship. This phenomenon has affected the whole [Uyghur] community psychologically. Seeing new people come to support was really, really moving, and I hope some of them join in on our activism.”

As Harvard’s Uyghur community continues to organize, students can remember the Ürümchi victims through active participation and support using their a platform to speak out against global injustice.

Amiya Tiwari’26 (amiyatiwari@college.harvard.edu) stands in solidarity with Uyghur people across the globe.