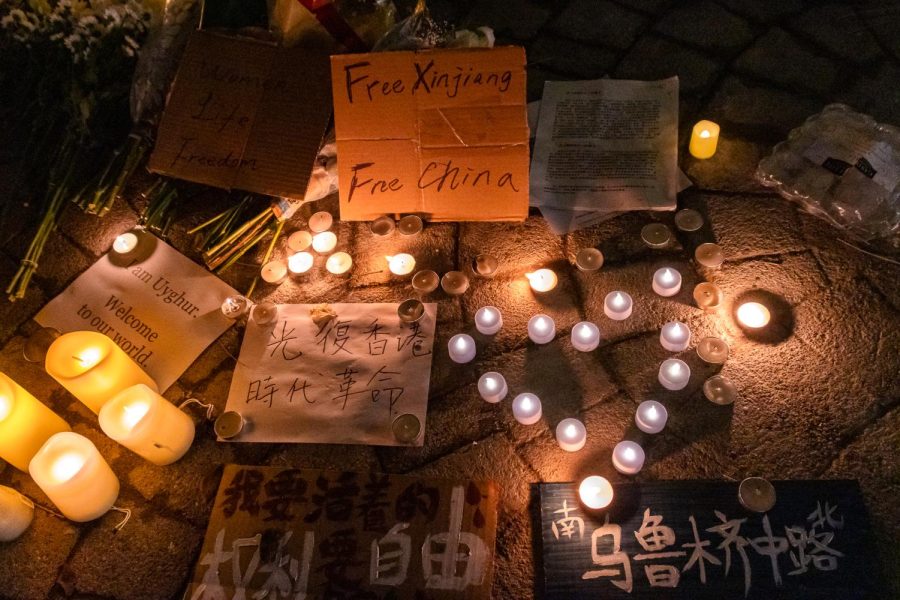 Disclaimer: names were omitted to protect the identity of sources.

Hundreds gathered near the Tiananmen Memorial in Boston’s Chinatown last Friday for a candlelight vigil to honor the victims of the Ürümqi fire on Nov. 24.

The vigil is one of hundreds happening in China and other countries to protest China’s zero-COVID policy after a fire in a high-rise apartment in Ürümqi, the capital of Xinjiang—also known as East Turkestan—killed 10 people, including at least three children, according to Chinese state media.

China’s zero-COVID policy, or “dynamic zero-COVID,” is a policy strongly backed by President Xi Jinping for over two years in his effort to control COVID infections. Under this policy, those who test positive for COVID or have come in contact with those infected will undergo lockdowns, quarantines, and testing. While the policy has kept infections and deaths low, it has disrupted life for millions. As of Wednesday, the Chinese government broadly eased zero-COVID restrictions after the surge of protests.

Posts on Chinese social media blamed the strict COVID-19 policies for the deaths. At the time of the fire, residents had been under tight COVID restrictions for more than 100 days and were blocked from leaving their homes.

After vigils and protests erupted in Shanghai, anonymous organizers of the Boston Stands With Ürümqi demonstration created a Telegram group to organize one within the city. The vigil served as an opportunity for the Chinese community in Boston to practice its freedom of expression and assembly, the organizers said.

“It would also be a great opportunity to display the bravery and the freedom-loving spirits of the Chinese diaspora community, as we were sometimes painted as ‘apathetic about social justice’ or ‘brainwashed by propaganda,’” the organizers said in an email to The Beacon.

The protest criticized the Chinese government’s treatment of Uyghurs—an ethnic minority in Xinjiang—as many of the victims in the fire were Uyghurs. Protestors and other human rights groups have long accused China for placing more than one million Uyghurs in “re-education camps” and subjecting many to sterilization and other human rights violations.

“We thought that it was crucial to form a vigil to mourn the loss of the victims and provide a safe communication space between the Uyghur community and the mainlanders, where the Uyghurs could talk about the oppression they and their families have faced from the Chinese authorities,” the organizers said.

“We saw the Urumqi Fire as yet another symptom of the cruel and systematic oppression that Uyghurs have been enduring in China, and we wanted to use this opportunity to amplify their voice, especially at an event that called for solidarity,” they added.

The organizers believed hearing personal stories at an open-mic session was a “more relatable and powerful form of communication.” It was “an informative and transformative experience” for many mainland Chinese people who may have not been aware of the allegations against China, according to the organizers.

“I saw [the vigil] as a great opportunity for me to join the force and join the movement to push the momentum,” said a protestor who is originally from China.

Knowing English and having access to foreign media, he continued, makes him more privileged to mainlanders because he can read the accusations that would have otherwise been censored in China—as China has denied these allegations.

“I think we are [mainlanders’] only source of information to truth and so I want to encourage them to never stop talking and to not be discouraged because there are like-minded people out there, like we can see today,” he said. “When they are frustrated, know that that’s normal too because whatever has been going on, it’s been so long and not much has changed.”

Silence and inaction is “an appeasement and an endorsement to tyranny,” a protestor said, as more people learn about Uyghur struggles.

“We must break our silence. We must stand in solidarity. We must echo their bravery with our own,” a protestor said.

They added that those in solidarity should not just send prayers from afar but take action.

“We cannot stop fighting until we have the rule of law, until the day when the Constitution isn’t just a sketchbook for a dictator to scribble on,” they said.

Some protestors even called for the Chinese Communist Party and Jinping to step down.

“Even if the zero-COVID policy ends, as long as the party remains in power, those tragedies will be repeated,” a speaker said.

Due to safety concerns, attendees were encouraged to maintain anonymity. Many dressed in black and wore masks, hats, and sunglasses to protect themselves and their families in China from governmental retaliation.

“Even though people still had to wear masks to keep anonymous during the vigil, it’s a great leap from having no public forum at all,” the organizers said.

Volunteers of the organization urge the Chinese authorities to allow public mourning for the victims in the Urumqi Fire, end the zero-Covid policy in China, release arrested protestors and activists, respect human rights, and abolish concentration camps in Xinjiang.

“The first four demands have been making the rounds among the Chinese diaspora all over the world, all of which were directly speaking to the Urumqi fire and the zero-Covid policy,” they said. “We wanted to give the world a clear and unified message, that we urge the Chinese government to respect science, the rule of law, and human rights.”

The vigil in Chinatown is one of several in Massachusetts since Nov. 24, including vigils at Faneuil Hall in Boston and Harvard Square in Cambridge last week.

“We sincerely hope people with different ideas can find a common ground through the event,” the organizers said. “Real change could only happen when more and more people join us.”

Category : In the Media
PreviousPHOTOS & DISPATCH: BOSTON STANDS WITH ÜRÜMQI
NextRemembering the Victims of the Ürümchi Fire