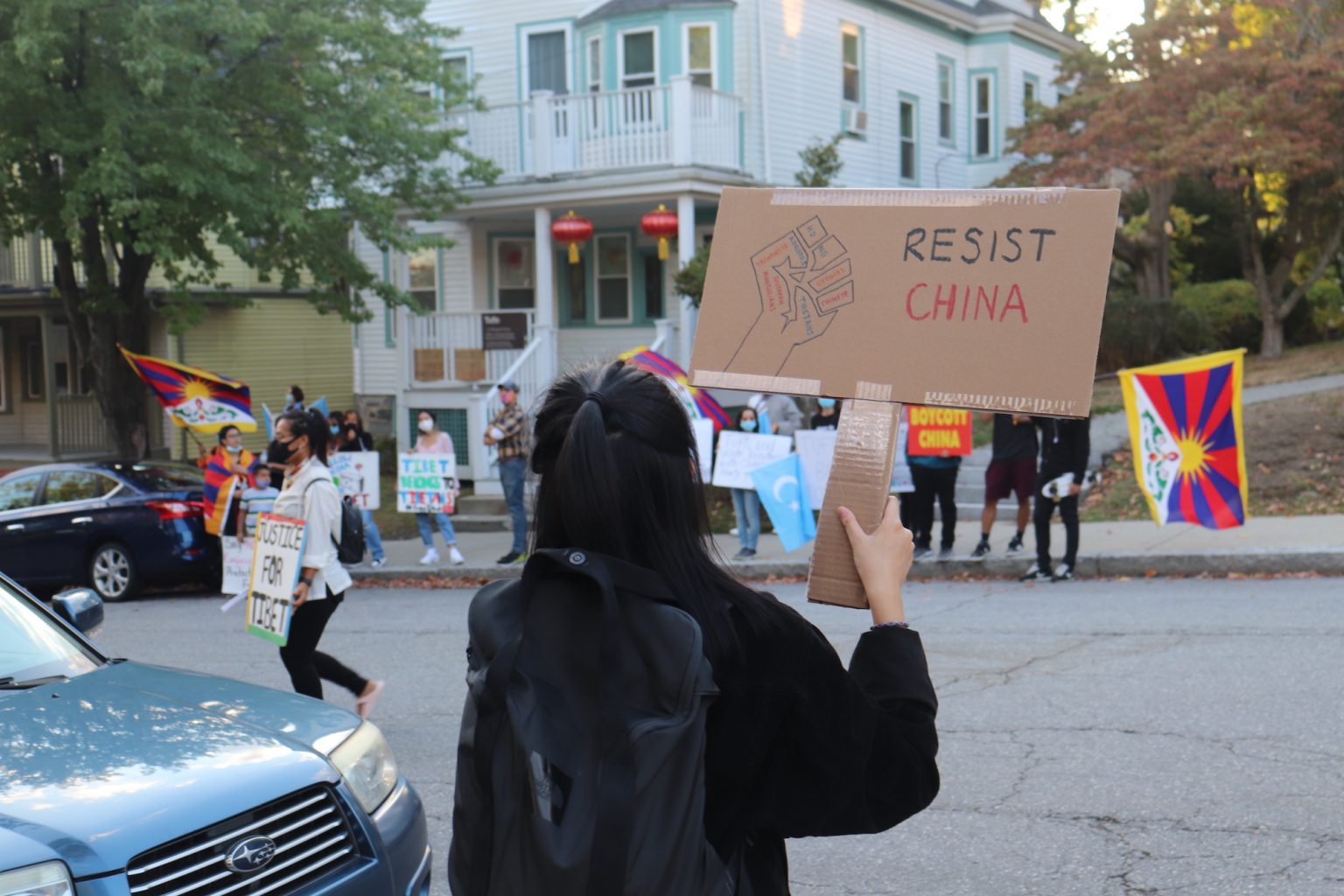 More than 50 protesters from the local Tibetan, Hong Kong, Uighur, Vietnamese and Taiwanese communities marched across campus on Thursday to protest the presence of the Confucius Institute (CI) at Tufts, which has financial ties to the Chinese government.

The activists and community members blasted the renewal of Tufts’ contract with the CI, a language and cultural education organization operated by Hanban, which is an agency closely linked with the Chinese Ministry of Education and Beijing Normal University, according to the CI’s website.

Olo Bayul, the president of the Tibetan Association of Boston (TAB) and one of the main organizers of the event, led protesters across campus.

The TAB created a petition calling on the Tufts Board of Trustees to eliminate the CI at the university and has lobbied members of Congress to take action, according to Bayul.

He said that the association has urged University President Anthony Monaco for several months to shutter the center.

The crowd of protesters included members of We The Hongkongers, Boston Uyghurs Association and the Formosan Association for Public Affairs.

Last year, the university announced it renewed the CI’s contract after an extensive review process that was instigated by concerns over the Chinese Communist Party’s  influence and suppression of academic freedom. No evidence was found of Communist Party propaganda being disseminated through the institute, according to a previous report from the university.

However, the committee did establish that the CI presented serious “reputational and ethical concerns” for the university. The contract was amended last year to address these concerns.

Many of the demonstrators did not believe the findings of the report. Phuni Meston-Eams, a member of the TAB, dismissed the idea that the CI’s main goal is educational.

“It’s truly not trying to learn about Chinese culture … [it] is really a front for propaganda,” she said.

The protest occurred on China’s National Day, and only one day after the raising of the Chinese flag at Boston City Hall sparked outrage among activists. Meston-Eams said that the TAB’s own request to fly the Tibetan flag was rejected.

“Are we a country of only thinking about money, profits and business relations? Are we thinking about human beings and values that will sustain global connection and global alliance?’” she said.

Patrick Collins, executive director of media relations at Tufts, expressed awareness of efforts to eliminate the presence of the CI on campus.

“We took very seriously the concerns expressed in some critiques offered by organizations and individuals outside Tufts that a Confucius Institute could in the future attempt to make more active efforts to influence the curriculum, limit freedom of expression or pressure Chinese students and scholars,” Collins wrote in an email to the Daily.

He also noted that the university respects all viewpoints.

“We respect the right of people, both affiliated and unaffiliated with the university, to express their opinion,” he said.

Nicci Mattey, president of Tufts Amnesty International, attended in personal support and in club sponsorship for the event. She spoke to the importance of standing in solidarity with local communities and for global human rights campaigns.

“We were really honored that they thought that we could be of help in this because it ties in so closely to the work we do in speaking out when we see human rights violations abroad and here at home … it’s really about mounting enough pressure such that the administration can’t ignore us,” she said.

Maya Mitalipova, a member of the Boston Uyghurs Association and a human stem cell researcher at the Massachusetts Institute of Technology, also attended the protest. She said she feels it is her moral obligation to speak up for members of her community who remain in East Turkestan, what Uighurs call the Chinese province of Xinjiang, where officials suspect that the government has detained millions in concentration camps.

“They cannot speak up. If they will be speaking anything that’s sensitive, they can lose their jobs,” she said. “If they are restricted even abroad, I have to do something, to use my education, to use my position as a scientist,” she said.

Chris Choi, an activist with Hong Kong Social Action Movements in Boston, is worried about his family in Hong Kong. He said the situation has worsened after the implementation of the controversial national security law in the region earlier this year.

He does not want to see China’s influence grow in higher education institutions.

“We want them completely out of all the colleges in the U.S.,” he said.