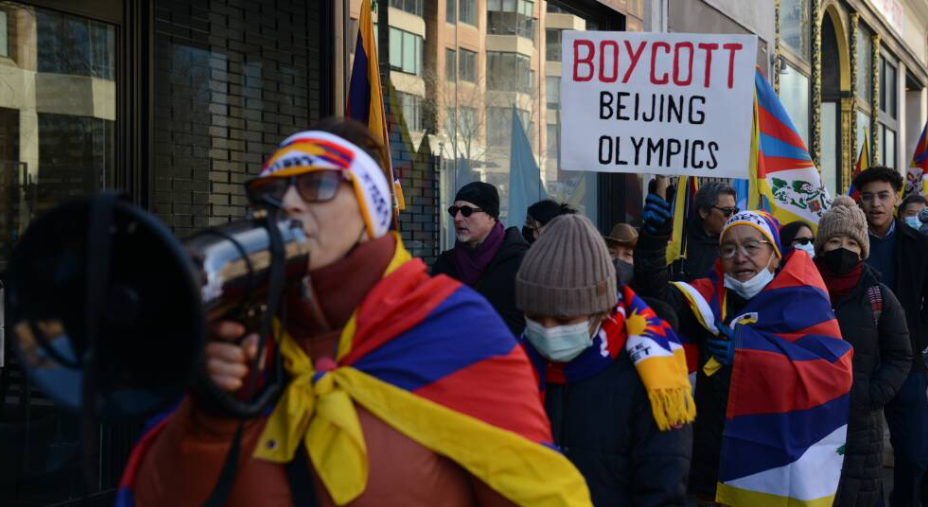 Olo Bayul has never been to his ancestral home. The 33-year-old Somerville resident was born in India after his parents escaped Tibet in the 1950s after the Chinese government occupied their country.

Bayul came to the United States in 1996, where he’s been an active member of the movement for Tibetan freedom. But as the political situation stands, his identity prevents him from visiting his homeland.

“It’s extremely difficult to just get inside Tibet,” he said. “Just to get a visa, especially with my Tibetan name, my Tibetan identity and also my work that I do for Tibetan freedom. So I have never been able to go to Tibet.”

Other communities,like the Taiwanese, Uyghurs and Hong Kongers share similar stories as they and their communities face a Chinese Communist Party that leaves little room for dissent. And as athletes from around the world converge on Beijing for the Winter Olympics and Paralympics, these groups are coming together and doing everything in their power to get viewers to turn off the Games and focus on what the Chinese government would rather not broadcast to the world: occupation in Tibet, encroachment in Taiwan, what the U.S. government has deemed to be genocide against the Muslim Uyghur population in Xinjiang and crackdowns on democracy in Hong Kong.

“Instead of the companies and sponsors all around the world talking about these issues, we have one of the most fascinating events being held, we’re giving that opportunity to the same regime that’s causing all of these problems,” Bayul said. “So, you know, it really is a slap in the face.”

In December, the Biden administration announced that it wouldn’t be sending diplomatic officials to the Games because of what it calls genocide in Xinjiang, where there is evidence that the Chinese government is rounding up more than a million Uyghurs in concentration camps and making them do forced labor, among other crimes. White House Press Secretary Jen Psaki said in December that the United States would not be “contributing to the fanfare of the Games” in light of the genocidal charges, while still offering full government support to American athletes.

Chinese officials called the U.S. boycott — as well as boycotts from Australia and Britain — “political manipulation,” and in January Foreign Minister Wang Yi told U.S. officials to end their “interference” in the Games.

Maya Mitalipova, president of the Boston Uyghur Association, compares this year’s Games to the 1936 Summer Olympics in Berlin, which Nazi Germany used to showcase its fascist regime to the world.

That was the first time in the history of the modern Games that people in the United States and Europe called for large-scale boycotts over human rights violations.

When Beijing hosted the Summer Olympics in 2008, which gave China the chance to show off as a major power, activists were making many of the same criticisms as they are now.

The main difference is that the various communities were essentially speaking out alone then. Now, they’ve united to hold rallies and protests in an effort to raise awareness of China's actions and promote a viewer boycott of the games.

Ho-Chou Tu is a member of the Formosan Association for Public Affairs MA, a Taiwanese advocacy group that raises awareness for Taiwan, which considers itself a sovereign state, but which the Chinese government sees as a province. She cites a few reasons a coalition formed this time around, starting with social media making it easier for people to connect.

“And then, secondly, China’s behavior is getting more and more audacious, just to the end we think, enough is enough,” she said. “It’s becoming international ... and I would also really credit the pro-democratic movement starting in 2019 Hong Kong. ... They really inspired everyone.”

Faced with thedaunting challenge of taking on the Chinese government, these protests, which have gone beyond just the 2022 Olympics, have helped bring together different communities in a way they may have not before. And with that solidarity, they’ve found hope.

Thondup Tsering is a member of the Tibetan Parliament in Exile, a legislative body representing displaced Tibetans around the world. The Amherst resident, one of two members from North America, said the groups have come together because they’ve realized a unified front can have more impact.

“When you add to this group folks in China who are really yearning for a democratic reform, the numbers are big, the numbers are huge,” he said. “It’s definitely, I think, seen as a threat by the Chinese government, and that’s why they’re taking it so seriously and are being so forceful and aggressive in terms of sapping any sort of dissension in China, in Tibet, as well as during the Olympics.”

While people are getting ready to watch figure skating, hockey and maybe even some curling, the people protesting Beijing’s role in the Olympics are going through with their boycott and not watching a second of the Games. They’re asking everyone else to at least think about doing the same.

Category : In the Media
PreviousAn open letter to United Nations Secretary General, António Guterres
NextIn Boston, a growing community of Uyghurs fights to save its culture and its people