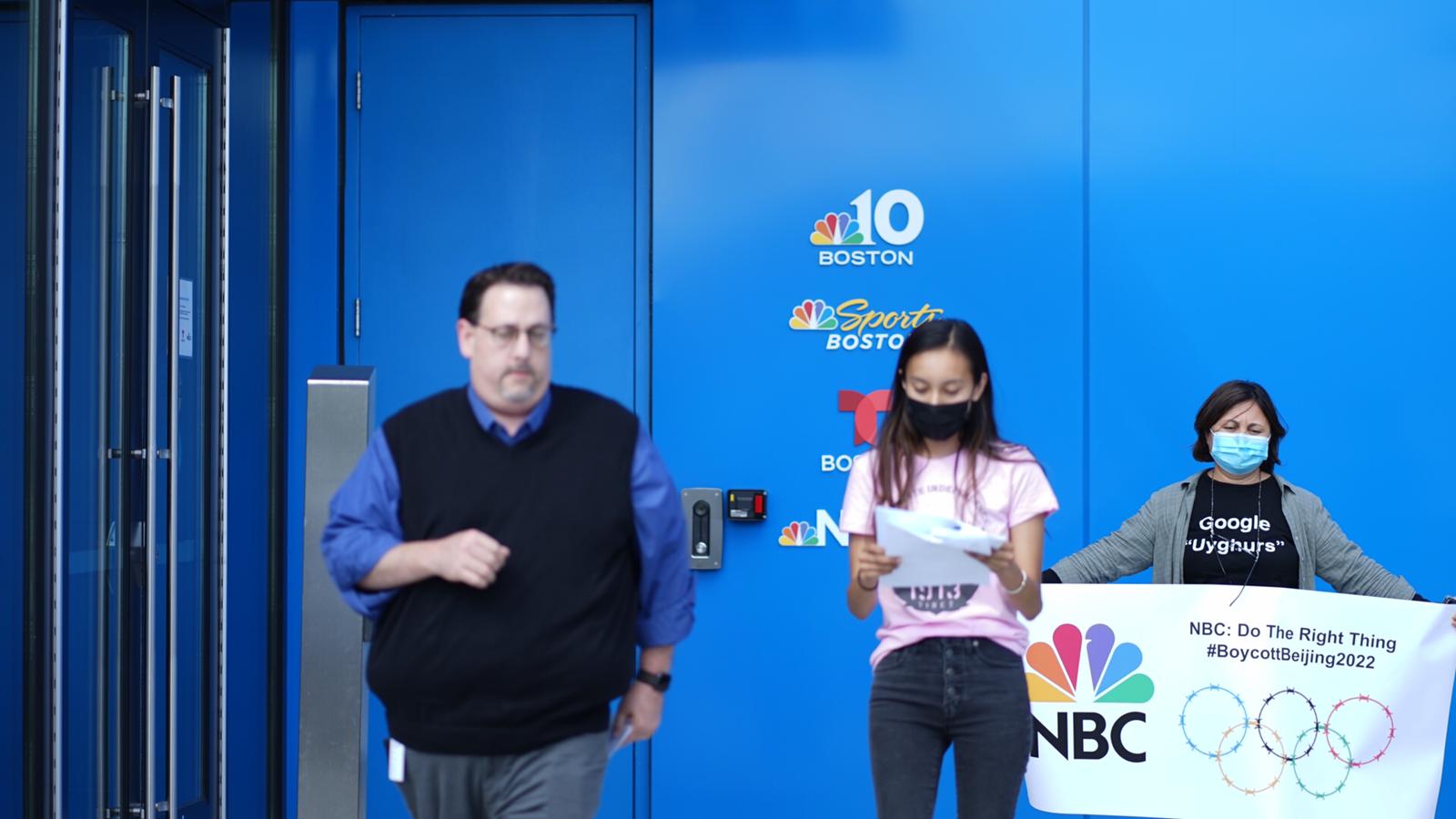 Students for a Free Tibet

Boston – On International Olympic Day campaigners representing Tibetan, Uyghur, Southern Mongolian, Hongkonger, Taiwanese, and Chinese people held a surprise protest outside the headquarters of NBC in Boston. The action took place on International Olympic Day against the backdrop of a Global Day of Action that saw rights groups and activists in over 60 cities around the world take to the streets calling on world leaders, National Olympic Committees, Olympic sponsors and all people of conscience to boycott Beijing 2022, ‘The Genocide Games.’

The campaigners in Boston delivered a letter signed by 200 rights groups and addressed to NBCUniversal CEO Jeff Shell and NBC Olympics President Gary Zenkel calling on the U.S. broadcaster to cancel its plans to air the 2022 Winter Olympic Games in Beijing. The letter stated: “By going ahead with the broadcast NBC will be legitimizing these abuses and promoting the ‘Genocide Games’.” The activists also held banners saying “Boycott Beijing 2022 Genocide Games #NoRightsNoGames” and “NBC: Do The Right Thing – #BoycottBeijing2022”. They also held signs with NBC’s official logo for the Beijing Olympics with the word ‘Genocide’ printed next to the U.S. network’s logo. The activists were denied entry to the building and asked to leave the premises after only a few minutes. A representative from NBC listened to a joint statement but refused to listen to anything further. After being moved to the sidewalk outside the office building, activists chanted “NBC! Do the right thing!” “No Beijing 2022!” and “No more bloody games!”

From New Zealand to Canada, Japan to Argentina, Australia to Sweden, thousands of people stood in solidarity today to deliver the joint message that China must not be allowed to use Beijing 2022 to ‘sport-wash’ the genocide against the Uyghur people, the severe and escalating repression in Tibet, Southern Mongolia, Hong Kong, and China proper, and the geopolitical bullying of Taiwan.

Maya from Boston Uyghur Association said: “To sit in the stands and clap for the athletes while genocide is being committed by the Olympic host just out of sight will be the equivalent of applauding the Chinese government itself. This is what Xi Jinping and Chinese leaders want most – they want the world to help normalize their authoritarian behavior and repressive policies. NBC and all others must boycott the Games. Genocide has to be the red line.”

Chris Choi from Hong Kong Social Action Movements Boston said: “The IOC has made it clear that they do not care about human rights. We as activists and community leaders have no choice but to call for a full boycott of the 2022 Beijing Olympics. This is not a complicated issue, it’s time we stand up for principles and human rights.”

Tenzin Yangzom from Students for a Free Tibet said: “We are calling on NBC and all Olympic partners and sponsors to boycott the Beijing 2022 Winter Olympics due to China’s genocide against the Uyghur people, the unprecedented level of repression in Tibet, Southern Mongolia, Hong Kong, and China proper, as well as China’s threatening and bullying of democratic Taiwan. Allowing the Beijing 2022 Olympics to go ahead at this time when the Chinese authorities are engaged in such egregious abuses is tantamount to endorsing their crimes against humanity and risks making the situation much worse.”

Howard Fass from the Formosan Association for Public Affairs Massachusetts said:
“Anything less than a total boycott of the Olympics in China at this time supports the Chinese Communist Party and its absolute stranglehold over the one-billion plus people who find themselves living under its tyranny. Our leaders, governments and businesses need to take the moral high ground and stop enabling this brutal dictatorship now. Anything less is collaboration.”

Lhadon Tethong from Tibet Action Institute said: “NBC has no business partnering with the Chinese government to broadcast the Olympic Games while that very government is committing genocide against the Uyghur people and carrying out an unprecidented campaign of repression in Tibet, Hong Kong and beyond. In the coming months, we plan to drive up the pressure on global governments, National Olympic Committees and especially Olympic sponsors like NBC to do the right thing and end their support for Beijing 2022.”

Support for a boycott of Beijing 2022 has grown exponentially since activists released a joint letter to governments in September 2020. Parliaments and elected representatives from across the political divide agree that supporting the Beijing 2022 Olympics is tantamount to endorsing China’s human rights abuses.

As human rights experts warned, the 2008 Summer Games led to a further crackdown on human rights and took place without any meaningful human rights due diligence. Contrary to China’s commitment to hold a “free and open” Olympic Games in 2008, Beijing continued to clamp down on the international media, and quashed all freedom of expression for Tibetans wishing to voice their opinions about the Games.